The Sonoff NSPanel is a great Kickstarter succes to ITEAD, but as with most successfull things in life it also comes with some downsides. Some issues are repeatedly reported on several social media. ITEAD took notice of the complaints and shared a post on social media with their plans for the upcoming firmware 1.2.0 for their Sonoff NSPanel.

Some devices weren’t supported to display and control on the widget section of the NSPanel. In firmware 1.2.0 ITEAD adds support for the DUALR3, DUALR3 Lite and the D1.

Names of channels for multichannel devices

For devices with multiple channels like the 4CH, Switchman M5, 2 or more channel switches, etc. the names of the channels set in the eWeLink app were not shown on the widgets screen of the NSPanel. Instead the default names “Outlet 1”, “Outlet 2”, etc. were shown. Many people got frustrated about that and were wondering where so set the correct names, but there was not a seperate setting for these names. The NSPanel should respect the names already set at each device setting and show those names. Firmware 1.2.0 fixes this.

Firmware 1.1.0 has some issues with widgets and with the stability of the WiFi connection. ITEAD fixes this with firmware 1.1.1.

Below are all improvements in 1.2.0 including the ones not mentioned above: 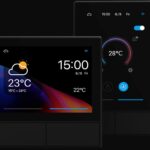 The Sonoff NSPanel is a multifunctional display device to add to your wall. It fits in US en EU junction boxes. It has a Nextion touchscreen display and you can operate eWeLink compatible devices and scenes with it. It also shows you the weather and you can use it as a thermostat with the build-in temperature sensor.
Read More

This site uses Akismet to reduce spam. Learn how your comment data is processed.

wpDiscuz
previouseWeLink had major server outage for mainly European region
nextWhat eWeLink features, improvements and devices can we expect in 2022?

Go to all news

Current status and percentage uptime measured in the last 24 hours by UptimeRobot.